Wind – One of Five Influences in Route Optimization 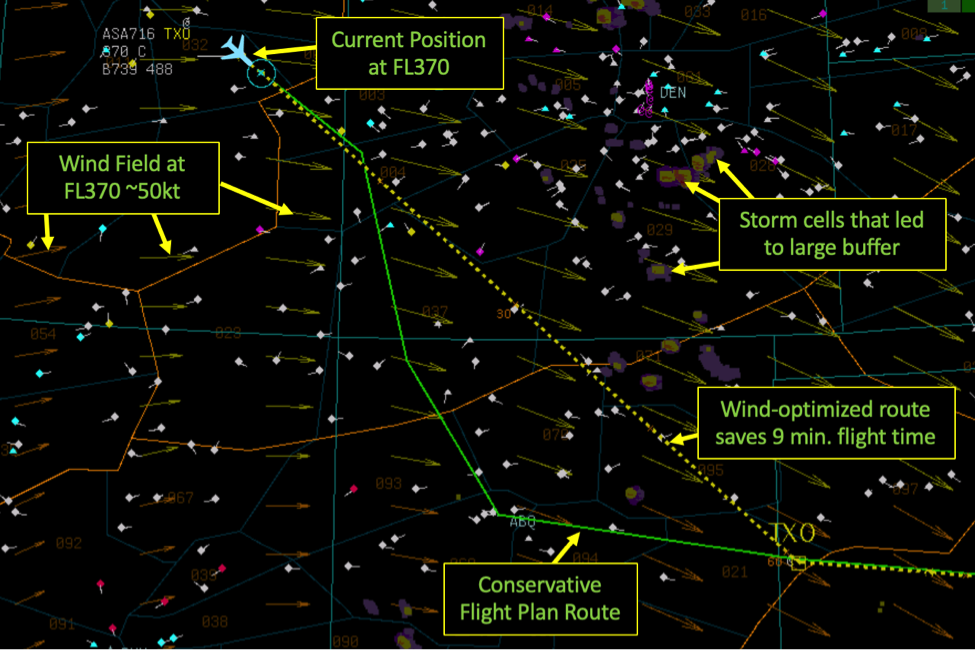 Wind – One of five influences in route optimization‍

Commercial air travel requires a great deal of planning. The flight routing alone requires extensive planning and coordination. First, flight schedules are computed months in advance. Next, flight plans are computed several hours before departure, and adjustments may be made shortly before departure or once airborne. One reason why adjustments are required after departure is that it is difficult for flight planners to account for all of the influences and constraints that affect flight efficiency. These influences and constraints include (i) atmospheric winds and temperature, (ii) atmospheric convective activity, (iii) airspace closures, (iv) strategic traffic in the national airspace system, and (v) tactical, neighboring traffic.In this post we look at the impact and importance of atmospheric winds.‍

Traditionally, flight planning programs compute the all-important fuel loading and routing hours before departure. This is a complex computation as there is no closed form solution to determine the optimum trajectory and fuel-loading combination. The problem of finding the minimum-time route through a wind field is analogous to the optics problem of light passing through a variable medium, as described by Snell’s law. This approach has been investigated in classic flight planning work, but in practice its implementation is not feasible given the strong non linearities of the problem. For example, the atmospheric properties, including the wind field, are four dimensional, varying spatially and temporally. This is typically modeled using a series of three-dimensional grids, each one forecasted at a specific point in time, where the properties are interpolated between time points.‍

Winds can be thought of as a consequence of atmospheric pressure variations, but not in the way you might think. Above the planetary boundary layer (where surface friction effects can be ignored), the wind speed and direction represent a balance between the atmospheric pressure and the Coriolis effect (due to the spin of the Earth). The result, represented in what is known as the Gradient Wind model, is that winds flow along atmospheric isobars. In other words, contrary to what one would expect, wind do not flow from high-to-low pressure, but orthogonal to that direction, along lines of constant pressure. And the wind speed is proportional to the pressure gradient—closely-space isobars mean high winds.

All of this means that while certainly nonlinear, winds are fairly smooth locally over space and time and wind grids can be interpolated to estimate the wind at any given space-time point. This is how wind products are used in aircraft trajectory simulators. But speed and direction are not the only wind parameters of importance. Aircraft performance also depends on the wind gradient—how fast the wind changes in spatial dimensions. While theoretically aircraft performance depends on both the horizontal and the vertical wind gradients, in practice only the vertical gradient effect is significant. Aircraft performance in the vertical plane (true airspeed and flight path angle), and in the horizontal plane (heading and roll rate), depend on the vertical wind gradients in the in-track and cross-track directions, respectively.

Once the wind forecast is available, and the important wind terms are accounted for in the aircraft performance models, it can be used in a route planner. A key input to the algorithm is the relative cost of time versus fuel. This will guide the algorithm in its trajectory solution but, in any case, the winds play an important role in optimizing the flight. Sometimes a longer route is more efficient because the winds are more favorable.

Searching for the optimal trajectory is challenging and the problem is made even more complex by constraints, such as inclement weather or airspace closures. In other words, the problem consists of more than merely the aircraft and the winds. And given constraint uncertainties in the pre departure phase, flight deviations tend to be conservative, leaving plenty of buffer between the aircraft and the constraint.

This means that once airborne, there may be plenty of opportunities to find an improved wind routing. At this point, not only are the constraint uncertainties reduced or eliminated, but the wind field uncertainty also is reduced significantly. Therefore, it is important for dynamic rerouting algorithms to use the most recent and most accurate wind field estimates available, and account for them in the rerouting calculations.

Next time we’ll look at atmospheric convective activity to understand the best approach to route optimization in the presence of powerful weather activity.

Turbulence – one of five influences in route optimization

SmartRoutes real-time dynamic route optimization is now available through a web-based interface. No software to load onto your system, No IT system intrusion, just an intuitive user interface providing route advisories with flight time and fuel savings.